Tacoma has no shortage of guitar-related history, from a wide array of performers playing our venues to the Tacoma Guitars line manufactured here from the 1990s through the early 2000s. But today’s story takes us back a century prior, to a creative instrument builder who patented his designs for the harp guitar while living in the Pacific Northwest.

Chris Knutsen – born Johan Christian Kammen in Norway in 1862, arrived in Washington State in 1895, settling with his wife first in Port Townsend. It was there that he received two patents for his unique revisions to the harp guitar, an instrument which was not uncommon in Europe in the nineteenth century but had yet to make its mark on the United States market.

So, what is a harp guitar? They may vary in size, shape, or design, but the basic idea is a guitar with any number of added unstopped strings. In theory, these strings could be tuned to any pitch, but in most of Knutsen’s designs, they were intended to provide a set of bass strings which would provide deep resonance when plucked.

Knutsen may have been successful in receiving his patents, but as an individual builder, he was limited in his ability to produce instruments quickly or in great quantity.

By 1898, Knutsen had moved his family and his instrument building operation to Tacoma. This same year, he began referring to his instruments as Symphony Harp Guitars on the interior labels, and established a licensing agreement with W.J. Dyer & Co., St. Paul, Minnesota, for the production of instruments bearing that name. Dyer Harp Guitar Co. is still in operation to this day.

Jump to 3:44 in this video to hear an example of a Dyer Harp Guitar from this era:

In about 1906, Dyer moved again, to Seattle, where he shifted his creative focus to Hawaiian steel guitars. His final move would be to Los Angeles in 1914, where his interest in building harp guitars abruptly ceased and he turned his attention to Hawaiian-inspired steel guitars and harp ukeleles. 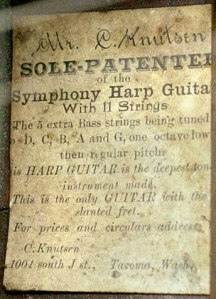 Although his time in Tacoma was relatively short, the years left a lasting impact on the history of harp guitar design, and several of the instruments he built while living in Tacoma still exist today.

Knutsen appears to have moved frequently while in Tacoma, appearing in the City Directory at a variety of addresses: the Hotel Garfield on Puyallup Avenue, 5227 South Junett in South Tacoma, or the address that appears on the labels from instruments during this period, 1001 South J Street.

Finally, a recording made on a Knutsen original – from 1912:

HarpGuitars.net – and specifically their Knutsen Archives – contains a wealth of information, photographs, and recordings.